Happy to be featured in Business in Calgary! 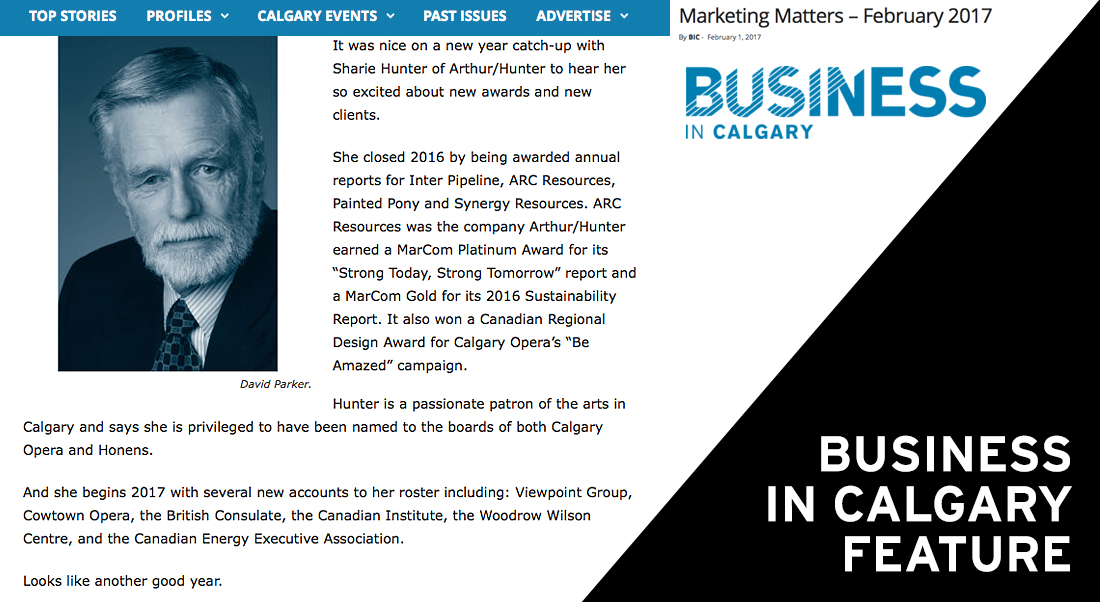 Arthur / Hunter would like to thank Business In Calgary and David Parker for the feature in this month’s Marketing Matters Read about Arthur / Hunter’s latest awards, community involvement and some of our exciting new clients and projects.

It was nice on a new year catch-up with Sharie Hunter of Arthur/Hunter to hear her so excited about new awards and new clients.

She closed 2016 by being awarded annual reports for Inter Pipeline, ARC Resources, Painted Pony and Synergy Resources. ARC Resources was the company Arthur/Hunter earned a MarCom Platinum Award for its “Strong Today, Strong Tomorrow” report and a MarCom Gold for its 2016 Sustainability Report. It also won a Canadian Regional Design Award for Calgary Opera’s “Be Amazed” campaign.

Hunter is a passionate patron of the arts in Calgary and says she is privileged to have been named to the boards of both Calgary Opera and Honens.And she begins 2017 with several new accounts to her roster including: Viewpoint Group, Cowtown Opera, the British Consulate, the Canadian Institute, the Woodrow Wilson Centre, and the Canadian Energy Executive Association.Looks like another good year.